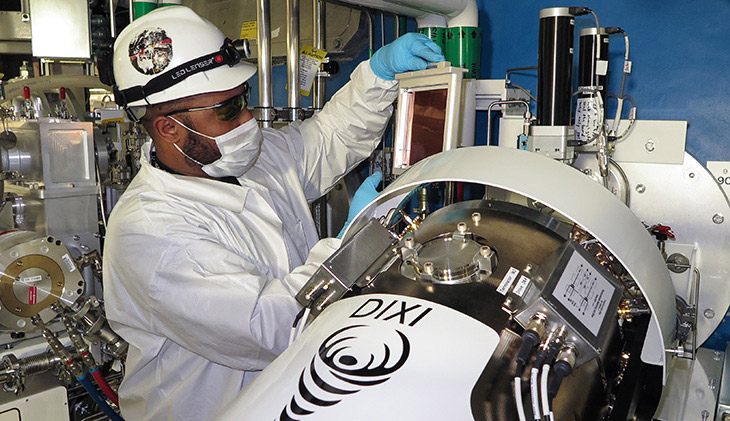 GA is designing an array of diagnostic instruments for the international ITER experiment, which will prove the feasibility of fusion energy. These systems include the ITER Toroidal Interferometer and Polarimeter (TIP), upper Wide Angle Viewing System (uWAVS) and the Low-Field-Side Reflectometer (LFSR). This work is done in collaboration with university partners (UCLA), National Labs (PPPL, LLNL) and local industry (Palomar Scientific Instruments).

TIP provides a robust, high-resolution, steady-state, interferometry and polarimetry solution that can be applied to a wide range of plasma applications.

The LFSR system will use microwave beams to diagnose the ITER plasma during operation. The system will allow ITER scientists and operators to collect data on electron density profiles and fluctuations from the outer edge of the plasma to its core.

Working with Kentech Instruments, Lawrence Livermore National Laboratory and Sandia National Laboratories, General Atomics has developed a cutting-edge line of high-speed imaging diagnostics. These include the DIXI (Dilation X-ray Imager) installed at the National Ignition Facility (NIF) at LLNL. DIXI is a high-speed x-ray framing camera that uses the pulse-dilation technique to achieve a temporal resolution (shutter speed) of less than 10 ps.

The most recent innovation is a single-line-of-sight (SLOS) imager developed with Kentech, LLNL, Sandia, and the Laboratory for Laser Energetics (LLE) at the University of Rochester. SLOS can capture multiple images with a shutter speed of 25 ps, roughly 100 times faster than previous technology. By capturing multiple images along a single line of sight, the imager allows greatly improved accuracy in radiographs of implosion experiments by eliminating the parallax that exists when taking two images from different angles – previously the only way in which such images could be taken so close together in time.

Certain disruptions of a fusion plasma can produce potentially damaging bursts of high-energy "runaway" electrons. As these electrons interact with the fusion plasma, residual gases and tokamak components, they can produce gamma radiation. To gather information about these runaway electrons, GA has developed a gamma-ray imager for DIII-D that can collect data using specialized gamma-ray detectors and a customizable viewing geometry across nearly the entire volume of the tokamak.