General Atomics' well-known TRIGA® nuclear reactor program boasts more than 55 years of success in the design and operation of its reactors. TRIGA is the most widely used research reactor in the world with 66 facilities built in 24 countries on five continents. General Atomics has built TRIGA reactors in a variety of configurations and capabilities, with steady state power levels ranging from 20 kilowatts to 16 megawatts. The TRIGA reactor is the only nuclear reactor in this category that offers true "inherent safety," rather than relying on "engineered safety."

In the 1950s, General Atomics pioneered the manufacture of fuel rods containing hydrogen. GA metallurgists perfected the process of making fuel rods containing high concentrations of hydrogen by using an alloy of uranium and zirconium metal. The resulting alloy was as tough and as corrosion resistant as stainless steel. 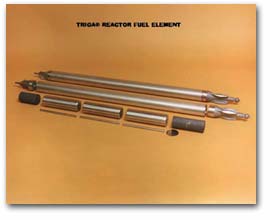 Thus, the unique uranium-zirconium-hydride (UZrH) nuclear fuel was developed at General Atomics and the use was extended in the 1980s by designing and developing proliferation resistant (low-enriched uranium) UZrH fuels for use in higher power regimes where newer TRIGA research reactors were being designed to operate. This fuel design provides the highest degree of safety against nuclear accidents regardless of power level. While there have been rare instances of safety related accidents at a few research reactors, such incidents have never, can never, and will never occur at a TRIGA reactor based on the simple physical principles of UZrH fuel