The demonstrated advantages of TRIGA® fuel over other fuel used in research and test reactors include: 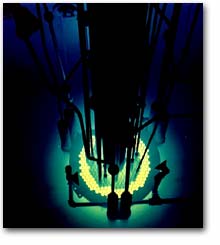 The prototype TRIGA nuclear reactor was commissioned on General Atomics' then new site on May 3, 1958. Known as the TRIGA Mark I reactor, it was originally licensed to operate at a power level of 10 kilowatts, but was soon upgraded to 250 kilowatts. This little reactor, because of its inherently safe features, could also be rapidly "pulsed" to power levels of over 1,000 megawatts after which (and without any outside intervention) it would return, in a few thousandths of a second, to a safe low power as a result of the effect of the ubiquitous warm neutrons. This original TRIGA, designated as a nuclear historic landmark because it pioneered the use of unique, inherently safe capabilities in nuclear reactors, operated successfully until 1997, when it was permanently shut down because of its age. The pulsing feature of UZrH fueled reactors, first demonstrated in this prototype TRIGA at General Atomics, are standard among many TRIGA reactors, and special designs of pulsed TRIGA's in use today routinely achieve power levels of 22,000 MW to test the safety of fuels for nuclear power reactors.

In times of increasing public concern with the perceived hazards of nuclear facilities, the safety advantages of TRIGA type reactors in themselves justify the use of this technology. The unique safety of the UZrH fuel makes unnecessary the expensive pressure containment building required by present safety regulations for research reactors with aluminum clad plate-type fuel. In contrast, many TRIGA reactors are located in existing buildings on university campuses and even in hospitals.

Additionally, there are perceived environmental hazards associated with temporary storage of the spent fuel at the reactor facility, transportation of the fuel and its final disposal. The unique design of UZrH fuel allows it to be used for a significantly longer time in the reactor, typically three to four times as long as other types of fuel. Therefore in a given period of time, there will be only one-third to one-fourth as much spent fuel discharged from a TRIGA reactor. The results are far less spent fuel stored at the reactor site, less fuel to be transported over public highways, and less fuel to be put into permanent high level waste storage or reprocessed.