Low-enriched, long-lifetime uranium zirconium hydride (UZrH) fuel is the fundamental feature of the TRIGA® family of reactors that accounts for its widely recognized safety, rugged, dependable performance, economy of operation, and its acceptance worldwide. The large prompt negative temperature coefficient of reactivity characteristic of UZrH fuel results in safety margins far above those achieved by any other research reactor fuel. Large reactivity insertions are readily accommodated and are routine operation for some applications. Inadvertent reactivity insertions have been demonstrated to produce no fuel damage in TRIGA cores. Power coast-down from full power after loss of forced flow cooling (and resultant power scram) has been demonstrated to be a very benign event with the reactor immediately available to return to full power. 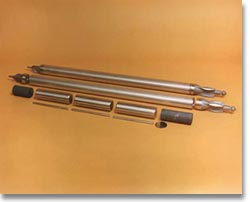 Long core life of the TRIGA fuel results from the fact that a large amount of uranium can be readily accommodated in the fuel matrix, occupying a relatively small volume % of the mixture. Major operating cost as well as total fuel cycle cost savings result from the much longer core lifetimes resulting from the higher U loading in TRIGA fuels compared to competing fuels. The long fuel cycle times for UZrH fuel also result in the greatest possible operational flexibility for the system in that reactor shutdowns can most always be determined by user requirements rather than fuel cycle requirements.

The UZrH material also has fission product retention capabilities far superior to competing research reactor fuel. Aluminum clad plate type fuel melts at about 650°C, releasing essentially 100% of the volatile fission products. At this same temperature UZrH retains about 99.9% of these fission products even with the rugged clad removed. 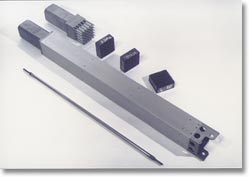 TRIGA fuel has been fully qualified by extensive testing under the U.S. Department of Energy’s Reduced Enrichment for Research and Test Reactors (RERTR) program.