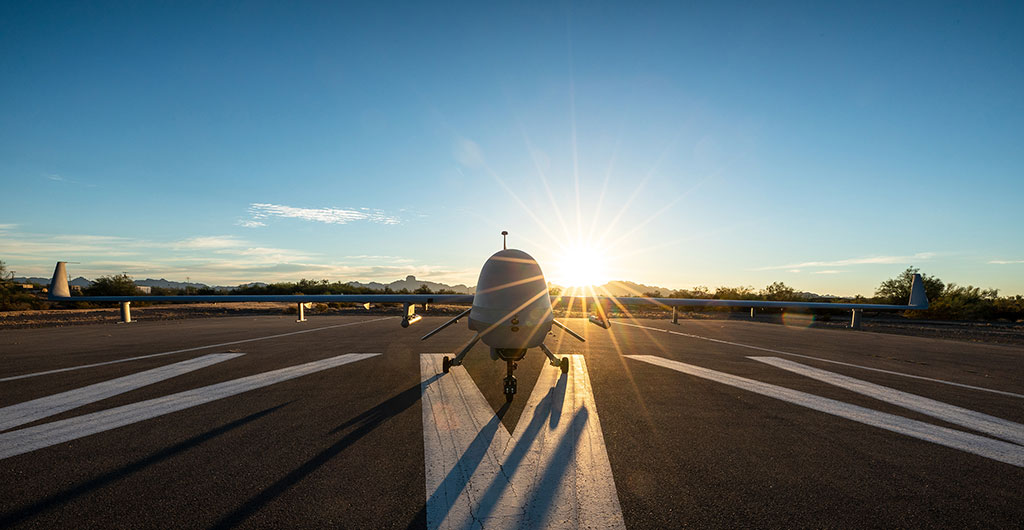 SAN DIEGO – 29 June 2020 – General Atomics Aeronautical Systems, Inc. (GA-ASI) completed a month-long demo event that showcased a suite of long-range sensors, Air Launched Effects (ALE) and Scalable Command and Control (SC2) on its Gray Eagle Extended Range (GE-ER) Unmanned Aircraft System (UAS). This was the third in a series of demonstrations for the U.S. Army that were based out of the Yuma Proving Grounds dating back to November 2019. GA-ASI partnered with industry to integrate best-of-breed long-range ISR payloads and ALEs on the GE-ER. The aircraft showed a persistent stand-off survivability with stand-in capabilities with up to 40 hours of endurance that Army Commanders can leverage to orchestrate forces in the Multi-Domain Operations (MDO) environment.

“We set out on a mission to demonstrate survivability and capability to the U.S. Army through strong industry partnerships in a cost conscious and affordable way,” said David R. Alexander, president, GA-ASI. “The goal was to take the Army’s concepts and put the power of industry innovation to work to make them a reality. We are in the business of solving problems and ensuring the U.S. Army Soldier has overmatch on the battlefield.”

The third demonstration built on the previous demos as the GE-ER – in flight at 25,000 feet – identified emitters with Communications Intelligence (COMINT) payload and integrated antenna array. This configuration provided single aircraft geo-location and cross-cueing to the onboard Synthetic Aperture Radar (SAR) to produce precision coordinates sufficient for targeting within minutes. L3Harris’ Rio Nino lightweight COMINT system, capable of detecting emitters out to 250 km, was combined with GA-ASI’s Lynx® Multi-mode Radar with SAR to perform the task. Additionally, the GE-ER gathered Electronic Intelligence (ELINT) using a Sierra Nevada Small SWAP Auto-ELINT (SSAE) system. The ELINT detections were cross-cued to the Lynx® SAR for rapid processing of target identification and targeting coordinates.

GA-ASI also conducted the first-ever launch and control of ALEs from the GE-ER. The ALEs were launched and controlled through the GE-ER and provided real-time full-motion video to simulated ground forces over a Tactical Scalable Mobile (TSM) network. This successful teaming between GA-ASI’s GE-ER and Area-I’s Altius-600 ALEs is a significant innovation milestone that demonstrates capability required for the future battlefield. The GE-ER also acted as a Tactical Scalable Mobile Ad-hoc Networking node, relaying voice and data to displaced users during the demonstration. All flight activities (including preflight, taxi, mission profiles and landing) were controlled from a GA-ASI laptop-based SC2 system. GA-ASIs SC2 system reduced emplacement and mission launch timelines by 75% from the currently-fielded Ground Control Station.

GE-ER is a long-range variant of the U.S. Army’s MQ-1C Gray Eagle UAS. It provides the U.S. Army with increased endurance and more payload capacity to support future mission tasking with considerable improvements in system reliability and maintainability. GA-ASI continues modernization in both aircraft reliability and mission effectiveness. The next milestone that GA-ASI will accomplish is flight testing of the 200 HP Enhanced Heavy Fuel Engine and dual 7.5kw brushless generators. GA-ASI will continue the demo series next year to advance the aircraft and its payloads to meet the emerging needs of the U.S. Army.