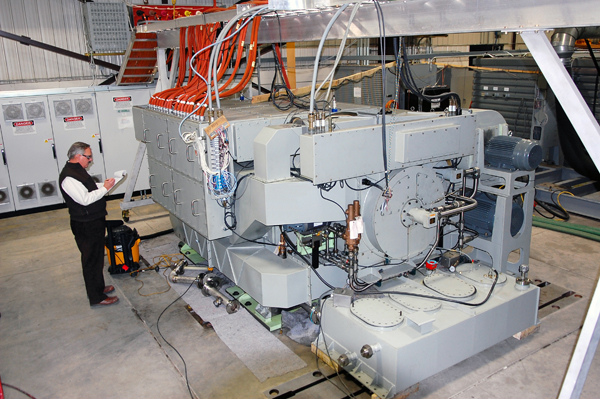 San Diego, CA. 9 April 2008. General Atomics (GA) and its team members reached a milestone today on the Electromagnetic Launch System (EMALS) program with the successful completion of factory acceptance testing of the motor generator component of the Energy Storage System (ESS). EMALS team member Kato Engineering, Inc manufactured and tested the motor generator at its Mankato, Minnesota facility. The 80,000 lb motor generator met all requirements for delivering high pulsed energy and power by demonstrating the capability to output 60 megajoules and 60 megawatts of electricity, the energy equivalent of 30 sticks of dynamite.

The EMALS ESS is a super-high energy density pulse power system that provides the energy storage for Navy’s new electromagnetic launch system. The energy storage technology is based on a precision-balanced high-speed rotating electrical core (rotor), which will be the most energy-dense production rotor ever built.

Four additional ESS systems will be built to support development testing at the Naval Aviation Engineering Station Lakehurst, New Jersey, culminating in aircraft launches at the test site next year. The first components of the EMALS equipment are scheduled to be delivered in 2011 for installation in the USS Gerald R. Ford (CVN 78), which is scheduled to be delivered to the US Navy in 2015.