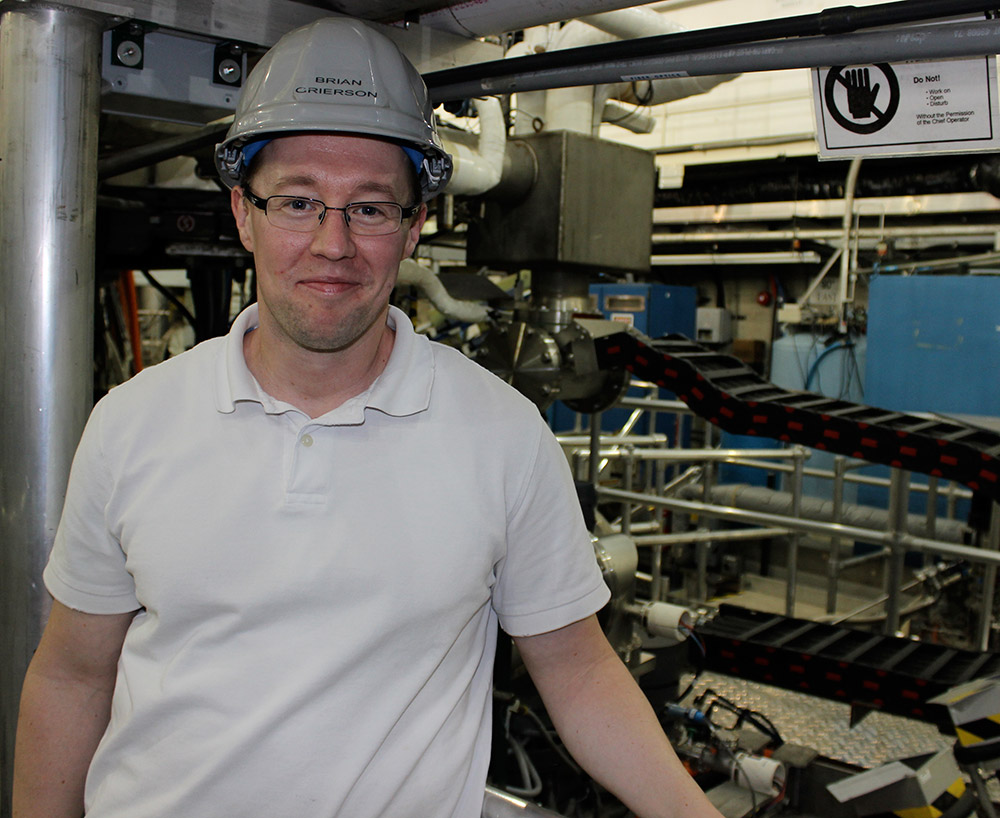 SAN DIEGO - May 14, 2014 - Physicist Brian Grierson of the Princeton Plasma Physics Laboratory (PPPL) has won a highly competitive Early Career Research Program award sponsored by the Department of Energy Office of Science. The $2.5 million grant will fund his exploration of fusion energy for the next five years based at San Diego’s DIII-D National Fusion Facility, operated by General Atomics (GA).

Grierson has spent the last five years with PPPL collaborating on GA’s DIII-D facility, the largest facility of its kind in the nation. After earning his Ph.D. from Columbia University, he joined the ranks of fusion energy scientists working to harness the power of the Sun on earth, developing a clean natural and safe energy source that is virtually unlimited. At DIII-D, his work focuses on the turbulent properties at the edge of the hot, charged plasma gas that fuels fusion reactions in machines called tokamaks.

The DOE grants fund scientists who have demonstrated exceptional ability. Grierson is one of 35 chosen this year from some 750 applicants nationwide. “By supporting our most creative and productive researchers early in their careers, this program is helping to build and sustain America’s scientific workforce,” said Patricia M. Dehmer, Acting Director of the Office of Science.

Grierson’s research focuses on a thin, roughly thumb-wide slice of the plasma edge called the “pedestal” where conditions change rapidly, becoming far hotter and denser toward the plasma core. “It’s like going from the surface atmosphere to the bottom of the sea,” Grierson said. “Only this change happens in a very small distance.”

“We are excited to see Brian’s recognition by the Office of Science,” said Dr. Mickey Wade, Director of the DIII-D National Fusion Program. “We are looking forward to working with Brian on this exciting project."

Conditions within the little-understood pedestal can strongly affect the core of the plasma where fusion reactions take place. Comprehending what happens in the pedestal can thus lead to better confinement, greater stability and more fusion power in tokamak plasmas.

Understanding and controlling the edge of hot fusion plasma is crucial for achieving high performance in devices like the ITER tokamak, the world’s largest fusion experiment being run by a consortium of 35 nations including the United States. ITER is now under construction in the south of France, and General Atomics is building one of its most important elements, the Central Solenoid, which will be the largest semiconducting electromagnet in the world.

The DOE grant will enable Grierson to install new diagnostic equipment on the DIII-D tokamak and bring in two post-doctoral fellows to assist with the research. Included in the new equipment will be 16 fiber-optic lines to relay light from the edge of the plasma to high-speed cameras and new spectrometers — devices that measure and record shifts in the spectrum of light.

“Grierson’s research will bring significant new capabilities to DIII-D’s already extensive measurement set aimed at understanding a critical issue for attractive fusion energy,” said DIII-D Director Wade. Much like the quality of balloon material determines how much pressure can be contained by the balloon without bursting, he explained, the quality of the pedestal determines how much heat and pressure can be contained within a fusion plasma. Higher pressure results in higher fusion power generation, which in a fusion power plant would result in a lower cost of electricity.

Results of Grierson’s experiments will test computer models that seek to predict conditions such as the temperature and pressure of the deuterium atomic nuclei, or ions, the main fusion fuel. The behavior of these fueling ions has proven far more difficult to measure than the behavior of impurities that enter the edge of the plasma from the walls of a tokamak and have been studied in detail. “Our research combines diagnostic development with model validation,” Grierson said.

Current methods infer the behavior of the main fueling ions from the properties of impurity ions. However, there is uncertainty in these inferences because of the complexity of the physics at the plasma edge. So direct measurement of the fueling ions is essential to advance understanding of edge-plasma physics and to test emerging plasma models.

Grierson’s new research will employ techniques that he previously developed to measure the properties of the main ions in the plasma core. “While such challenges could be great, the scientific results could be greater,” he said, paving the way for high-performance operation of ITER and future fusion-energy producing tokamaks.

The DIII-D National Fusion Facility operated by General Atomics is the nation’s largest of its kind. Led by award-winning researchers, it is the center of leading-edge plasma physics research for the Department of Energy Fusion Energy Sciences program. Its mission is to establish the scientific basis for optimizing the tokamak approach to developing fusion energy, harnessing the power of the Sun and all stars to create a natural clean energy source on Earth. For more information, see www.ga.com.