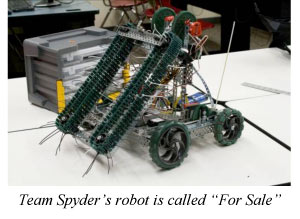 The second annual VEX Robotics World Championship drew more than 2,000 students and 260 teams from 13 different countries competing. Each team entered a robot that they designed and built using the VEX Robotics Design System in their quest for the world championship title. Teams work closely with educators, mentors and coaches to build a robot that can solve competition challenges quickly and efficiently.

GA supported this effort to continue encouraging students at all grade levels from middle school through college to take an interest in engineering, math and science to support the increasing demand for engineers in the future. As the designer and developer of critical high tech systems for both the Department of Defense and the Department of Energy, GA is keenly aware of the importance of developing home-grown engineering talent to support the technology breakthroughs of the future.

GA is a San Diego based company with a 50-year history of successful solutions for environmental, energy, and defense challenges. GA specializes in performing innovative research and development and transforming conceptual results into practical systems. Affiliated manufacturing and commercial service companies include General Atomics Aeronautical Systems, Inc., which produces the Predator® family of unmanned aerial vehicles.