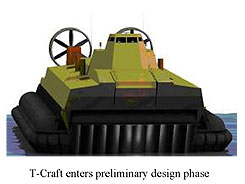 The T-Craft is a high-speed vessel intended to deploy in unloaded condition and travel more than 2500 nm to reach a sea base. Once it makes a connection to the sea base transport ship it would then have the ability to serve as a high-speed connector ship, carrying tanks, vehicles, personnel and cargo payloads up to 750 long tons, at speeds of over 40 knots to the beachhead.

Jim Zgliczynski, EMS Director of Motors, Generators and Navy Integrated Power Systems says, “ONR specifically mentioned the innovative GA hybrid electric drive design as one of the reasons that Umoe was given a high technical evaluation in the selection as one of three competitors to develop the T-Craft in Phase II.” During Phase II, GA EMS will complete the preliminary design of the hybrid electric propulsion drive.