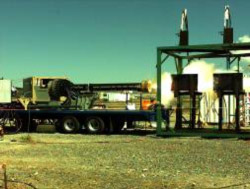 San Diego, Calif., October 22, 2009. General Atomics Electromagnetic Systems division (GA-EMS) has successfully fired multiple rounds for the first time in a prototype of its new Blitzer™ electromagnetic railgun air defense prototype system. These tests were performed at the US Army Dugway Proving Grounds under a contract with the Office of Naval Research. Testing is scheduled to continue through spring of 2010 and will culminate with the launch of tactically relevant aerodynamic rounds.

Blitzer will provide transformational, leap-ahead air defense capability against a number of threats for both naval and land-based applications. With a muzzle velocity of more than twice that of conventional systems, Blitzer provides significant increases in standoff and lethality at lower cost without the need for propellant or high explosives.

“These tests are an important first step toward demonstrating the viability of a revolutionary technology that will significantly improve the safety and protection of our warfighters at sea and on land,” says GA-EMS Division Vice President R. Scott Forney III. “GA’s internal investment in prototype development of both the energy pulse power system and Blitzer™ electromagnetic railgun continues to demonstrate our commitment to complement our customer’s efforts with transformational electric platform technologies. Confirmation of the electromagnetic design increases confidence in related launcher and all-electric technologies.”