General Atomics and the General Atomics Sciences Education Foundation today announced $150,000 in financial contributions to the Monarch School, a unique public/private collaboration dedicated to the education of homeless children in San Diego.

Founded in 1988 and now located at 808 W. Cedar Street, the Monarch School provides an accredited Kindergarten through 12th grade education for some 120 homeless and at-risk children. The school is operated year-round under the auspices of the San Diego County Office of Education's Juvenile Court and Community Schools Division. Monarch School is now engaged in a capital campaign for over $5 million to expand to a second school and serve a total enrollment of 350 students.

The General Atomics donations will provide for a new classroom to be named in memory of the late Walter Simon, a former GA Senior Vice President, who died this August. Part of the $150,000 in contributions will be provided by the company, and part by the General Atomics Sciences Education Foundation.

"Our mission at Monarch School is to provide a safe and caring environment where homeless and at-risk youth can improve their lives through education," said Sarita Fuentas, Monarch School's Principal and Chief Executive Officer. "Through the generosity of donors such as General Atomics, we're hoping to serve an ever increasing number of San Diego's estimated 2,200 homeless children and adolescents."

General Atomics and its Sciences Education Foundation have played a major role in supporting education in San Diego County, with special emphasis on enriching science education. Activities include the development -- by GA staff members working with San Diego City and County teachers - of "hands on" classroom teaching modules which have been implemented in over 40 San Diego County schools. The Foundation also provides teaching materials which are sent to high schools throughout the U.S., as well as to many colleges and universities.

Two other donations were announced by the GA Sciences Education Foundation. One donation of $20,000 will support the Classroom of the Future Foundation for teaching middle-school science at four demonstration schools in the San Diego south county region. A second donation of $20,000 will go to the Middle School Science Education Leadership Initiative (MSSELI), a project supported by San Diego City Schools and the San Diego County Office of Education. 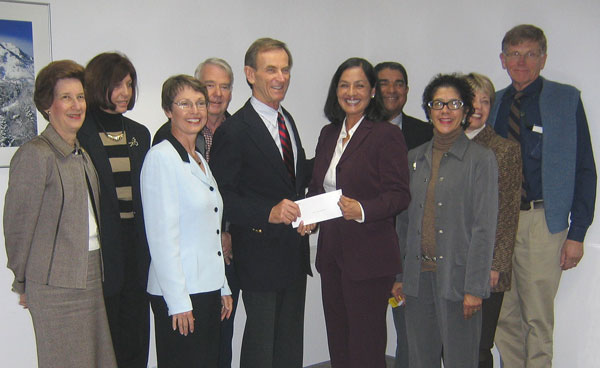