General Atomics Inertial Fusion Technologies division designs and develops systems for target fabrication, assembly, metrology, and shot diagnostics for inertial fusion and other scientific research. These targets are shot with high-powered lasers in order to produce various types of reactions and radiation emissions. Since the high-power lasers destroy the targets with each shot, supporting this research for high-repetition-rate lasers requires mass-production fabrication methods and fielding systems for targets.

Since 2011, GA has supplied targets for high-repetition-rate laser experiments using anywhere from hundreds to hundreds of thousands of targets each. Our experts work collaboratively to design and construct systems for target fielding and insertion. These targets are typically mounted on frames, each frame holding dozens to hundreds of individual targets.Targets can also be lithographically fabricated on rotating cylinders or other bases. 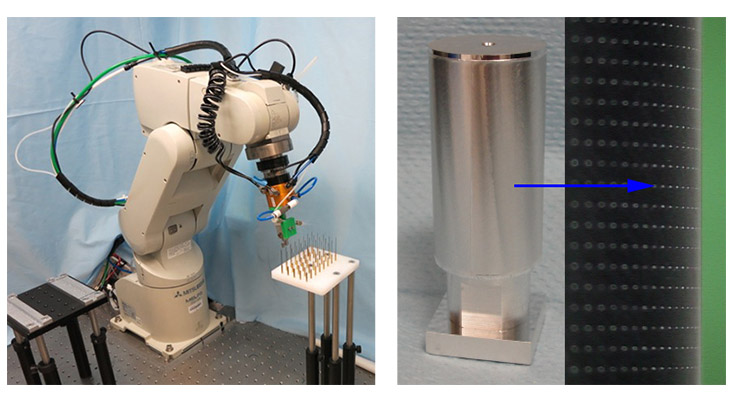 Many strategies are deployed for the mass production of targets including:

This video shows how the target assembly in the header photo is manufactured.

GA is also developing a 10-Hz-level solid target inserter inspired by the cinema film projector. In the GA target inserter, a "film strip" carries targets into the target positioner, and targets are suspended on fibers or films over the openings in the strip.